In simplified words, BIM (Building Information Modeling) is the evolution of traditional concept called CAD (Computer Aided Design) and while there are entire books written about it after the term was popularized by Jerry Laiserin, for educational purposes we’ll try to be as simplistic look possible:

Before, when designing a building, the architect after a good joint of marijuana made a freehand sketch and modeled the expected volumes, then did isolated strokes that were defining distribution, and finally some details that reached the level environments. He closed his briefcase and went for a swim in the pool while in the office the other architects and engineers were searching at a chalkboard ways to translate that information so that specialists will give way with structural features, construction, mechanical and economic… in short, a long and disconnected process in which many disciplines ended in PLANS for the construction.

The BIM concept is based on carry all the process under digital models georeferenced since the first day with lighting analysis, energy saving, geotectonic conditions while the first volumes are conceived. And the whole process of design and construction is linked. So, subsequent tasks that were lately and painful as As-built drawings are generated on the fly construction. The process does not end with the construction but is just the beginning of the operation, such that the object looks more like a guy who is born, grows, produces well-being and one day will die.

Between saying and doing there is a world of difference, and anyone could even think that is the cannabis effect. AutoDesk users which previously played with Architectural Desktop and now know Revit will more or less know that the concept is not so far away, and those of us who have seen the Bentley I-model also understand that there are walking into things beyond buildings and the reasons that everyday makes the topic becomes popular:

I insist that this issue of 3D cadastres and model cities is plenty for many of our countries which suffer from basic tasks, but I admit that the item must not be unknown because many of our cities like Bogota, Sao Paulo, Buenos Aires, Mexico, to give examples can be pilots scenarios of something that European developed countries and United States see as an entertaining fashion. Online games such as City Ville bring to practice planning concepts that become chewable, so that those of us who come from the CAD concept and were excited by the disciplines associated with the geospatial topic must maintain our gaze in BIM, because will come including itself intrusively almost as the spatial GEO is now and will possibly entertain us the next 15 years.

One way to see running the BIM is identifying how software vendors plan to deploy it. AutoDesk carries its own line; in this case I’ll display how Bentley is displaying it as it is a topic that I have watched more than three years in the I-model wedge. 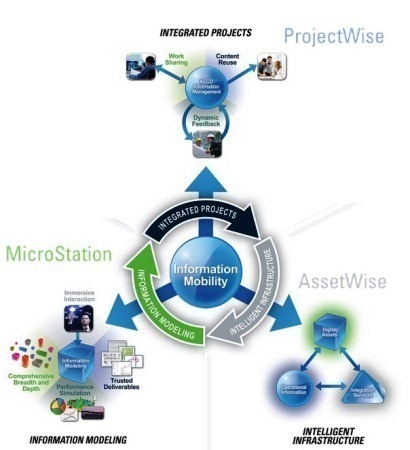 Bentley has focused on three tools that have led them to stardom:

Everything, looking for the latter purpose, that infrastructure and its life cycle should be the primary point of interest, but not as an inert object but as a subject with life and is reflected in how all platforms have aligned to its approach to geo-engineering: 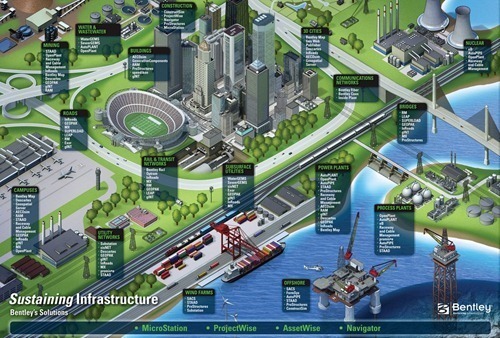 Then, I-Model is not more than a container of infrastructures dossiers as well as they are in a person.

And so, our life is not just than a set of files that carry our history since we were conceived until we die. If we go to the doctor we must refer to the record, if we pay taxes, if we sell a vehicle… it’s all part of birth, grow, reproduce, generate wealth, and die.

For Bentley, BIM is a parallel to this on the I-model as a container of files:

The great gain of Bentley is in a unique format: the DGN now with BIM capabilities and which is known as I-model. I understand, it is smoked, Astral and even naive. But I must admit, it is worthy of admiration. 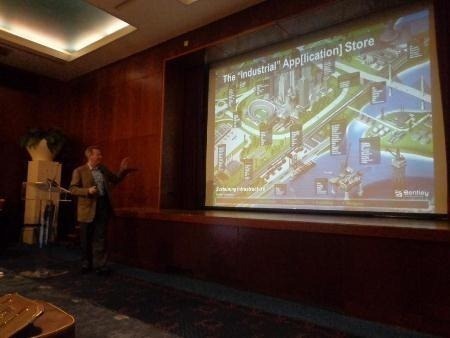 To where goes Bentley with the BIM topic

Let’s look at a scenario where an entire city is tucked inside a virtual model:

A gang crew out to solve a call of a broken sewer. The technician takes his tablet and capture the point where is placed, the coordinate indicates that at that point coincides with a related infrastructure: a street with a hydraulic binder of 20 cm, down a base of 20 cm and a sub-base of 35 cms. Below passes a sewage line of PVC 8 “, built 11 years ago and that had received maintenance 13 months ago.

If everything was inserted into a standard BIM model, no matter with what software was designed or in what time it was built; its file will be the same. Acquisitions of 2012 now have a logical sense: SpecWave, SITEOPS, FormSys, elcoSystems. Bentley seeks to standardize, position, making friendly format, to realize the BIM term. 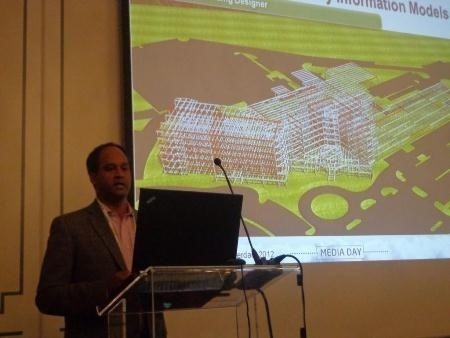 What expectations does Bentley lead with the BIM

While ESRI prioritizes the GIS theme and its applications, AutoDesk includes a range from building design to animation for film, Intergraph integrates with ERDAS, Leica and other HEXAGON family, Bentley decides to concentrate on infrastructure from its construction until its operation: roads, buildings, industrial plants, maritime platforms, railroads, power plant, mining, hydro-sanitary systems, 3D cities, etc. That makes us understand what’s looking for with its recent alliances with Trimble, SIEMENS and why the interoperability opening with Revit.

Hammering with the I-model comes from is called Be-Inspired in Baltimore. The projects portfolio, the scope of recent awards as Bangalore in India, the insistence on CAPEX, OPEX, the balanced portfolio in which can be exchanged licenses according to demand… everything points to have enough data so that infrastructures speak through their records:

In conclusion, each day will see more BIM in our daily technical and administrative duties, but not specifically with this name and as we can see, beyond the buildings that was the term where the idea was first coined. The connectivity we now enjoy and the trend that carry computer applications will make that this, which I’m just exemplifying with Bentley model, become real.

According to Wikipedia: BIM is the generation and data management process from one infrastructure during its lifecycle using dynamic buildings modeling software in three dimensions and in real time, to decrease the loss of time and resources in design and construction. This process produces an infrastructure information model (also abbreviated BIM), which encompasses building geometry, spatial relationships, geographical information, as well as quantities and components properties of the infrastructure.

For Bentley, BIM is intelligent infrastructures.