For those maniacs on the weather and want to know if in the other side of the world is day or night … this application is just cool (Spanish Idiom: ‘chuparse los dedos’).

It’s about Desktop Earth, which converts the desktop computer into a satellite view. Although it may seem a simplistic picture, let’s see its performance and I’m quite sure that more than one, after reading the post, will go to test it, even to see if what I tell you is true

Rather than being a simple image, it can be set what they call “day image“, where you can define a year’s month and this shows the change that occurs in the winter at latitudes near the pole.

Let’s see this image on the right which shows the difference between January and August.

There is another option of bathymetric view that shows the ocean in shades, and if it is left the option “auto select according date” it is set to the date of the operating system.

Then in the “night image” options, it can be set solar lighting display which corresponds to the computer’s time. You can specify a different GMT.

There are also options to specify whether the dark is seen as simple shadow, with moon light or with the night light of the cities.

Then, among the most interesting options, you can set the choice to see the cloud from over 10 atmospherics information sources and establish minimum or maximum density.

To set up data sources option, once installed just apply right click on the taskbar’s icon and select “cloud updates“. You can also define how often is expected the image to be updated; this setting can be from 3 to 24 hours.

Oh, and to prove how true it is, see the comparison between Google Earth’s atmosphere view and the desktop’s image. 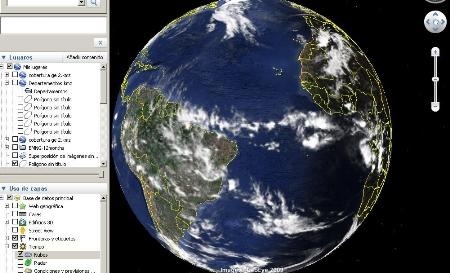 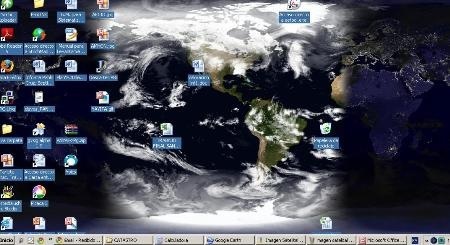 Just great! I imagine it could be of great use during hurricanes seasons just to know if Txus is already slept ;).

I know, my desk is full of documents and my widescreen monitor seems wonderful.