TRANSLATION NOTES: Please read some comments at the end of this post.

… And days ago you don’t write me

Did you off the Internet?

Or are you in the streets

Or don’t you love me anymore?

Your cloth for tears: the blog

Honduras returned to the world scene after already little was spoken of this short piece puzzle force accommodated in the Central American isthmus. Few news that were reading out were already obsolete, Hurricane Mitch, the President eating melon, the survivors of Cayos Cochinos, in short, little goes abroad and stays in the indifference of those who have never visited the Central American region, which has a cultural, ecological and historical richness. 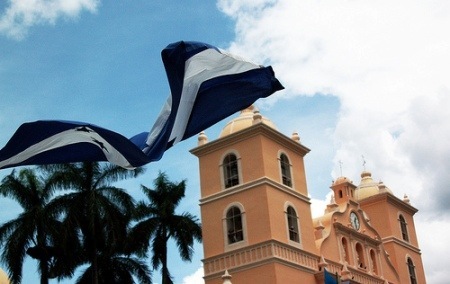 But finally, after a whole week of crisis, now comes to Honduras the General Secretary of the United Nations, which as you know, is active on left’s position (*) since long, he comes with a certain pessimism, it is not known if he comes to ask or tell, and before that happens, here are some alternatives that are outputs from my conversations with the lord of gold fishes in Macondo:

1. Let there be no truce, Zelaya must return to finish his six months

This may be the position of the international agencies with which Zelaya has found support, however the country internal polarization is complicated by the link he has with Chavez line. It becomes more difficult because if so, chaos would continue for six months, and who knows if they would give by unlawful acts that these days have taken place such as the adoption of amendments to the municipalities law (which is good for everyone), there are also allegations against his cabinet.

Another difficult aspect of this would be the inevitable discrediting of state institutions and civil society who have stated disagreement or illegality with the actions of the executive, such as Supreme Court, Congress, the Public Prosecutor’s Office, Catholic Church, Evangelical, Human Rights Commissioner, Armed Forces, among others.

2. To find resolve the crisis with a referendum and that the people decide

This output has been proposed by the Human Rights, which states that through a voting legal instrument with international agencies monitoring the people decide if they want Zelaya to come back or not.

With this all could be happy; supporting whatever decision could be for the next just six months missing to the elections planned for November 2009. If there is throwing away of dark feelings, we could live in bearable chaos… difficult but is an option.

3. That the interim Government decides not to negotiate

It would imply that there will be an extreme stance where they don’t want to accept any kind of agreement in peace favor, even denying the referendum option based on that everything what has happened is within the juridical framework. This would make that internationally the country should strive to make seem truth what appears to be a proposed lie for those who appear to be liars against the ones who have always lie us, plus the social tensions that supports Zelaya which would end seeking the support of the left.

The worst of this is that the civil war is inevitable, because as it happened in El Salvador it would enter money and weapons from Chavez line and there is an aggravating factor: If drug trafficking and organized crime also enter, the movement would be unstoppable. In El Salvador left won the battle in the mountainous area that in percentage is low; in Honduras, throughout the territory is mountainous, so it would have another advantage to the left.

4. That ideology gets near in this trouble (**)

This would imply that the United States and Venezuela pulled out of the depths of their livers the intention of taking sides for ideological and expansionist (a plaintive cry that is not heard but we all know that accompanies all this as the black magician in the movie “Australia”) purposes. It means that Venezuela would seek the left-leaning take a major stronghold in Central America, one more to what is already Nicaragua (which has always been), El Salvador (where it won the elections the FMLN) and Guatemala (although not given color it is left-leaning). But on the other hand, the USA try to catch up. This is in doubt because Obama has entered in a low profile, and how we see things, the strategy on Iraq is to withdraw before telling the truths of others struggle, and for America, Honduras is an insignificant spot on the tablecloth. But I do not believe he considers negligible the Chavista influence that includes several countries of the Southern Cone and Central America, and that also has strong ties with Communist China and Iran.

If the ideological struggle is drawn into the issue, we will all lose, because it’s like the religious struggle, which nobody ever has been able to explain more than superficial awareness pleas for forgiveness a century later.

Every day marches in defense or against the president are greater, but with no contingency or proposals. Only poetic cries that may end when things are resolved at the political level and the necessary changes are not made.

Whatever happens, we want peace and that the country take the necessary transformations.

The photos are taken from Flickr on Crisis in Honduras.

(*) hacer tiritos con la ñurda: In this phrase there two important words for understanding its meaning: ‘ñurda’ which means left and ‘hacer tiritos’ which is similar like shooting to a target. So the phrase could be understand as ‘to be an active of left’s ideas’.

(**) meter las narices en algo: Literally translated as ‘keeping your nose near something? Is a popular idiom used when you take part of some situation you haven’t been invited or you came near just for curiosity because nobody has called you.