Already several days ago I had been speaking of BentleyMap, we recently considered the data migration and the ability to automate the process, in this case we are going to show an example of customization of Geographics tools I had and that was needed when we started to operate xfm.

Before Bentley Map’s left, in the 2004 conference was presented the xfm scheme as an alternative to where they were going but did not sound so attractive because the Geospatial Administrator seemed as difficult as it is now. After seeing its features we had time to sit down and think about how likely it was to integrate xfm without leaving Geographics and from this was born an interesting project of which I will speak later. In this case I want to focus on first thing we did when the Geographics tools nostalgia have not be seen anywhere in Bentley Map; we did it with a programmer recently graduated from Catholic University and with good knowledge on .net.

The problem with Bentley Map is that it left out some Geographics basic functions, the user can not find how to solve (not in a traditional way). If you notice, these are basic and this is a great Bentley Map weakness, which lacks of too simple conventions but other less robust tools have them and if they have it there are well hidden even to the users of its predecessor. Let’s see what these functionalities were:

This video can be downloaded from egeomates; images below are taken from this. The development was on .Net, the project was on Geographics 8.5 and the database was 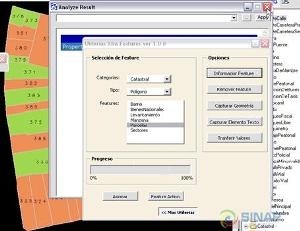 This simple toolbar allows converting dgn graphic objects into elements associated with the project through the feature table, it’s practical but Bentley Map did not bring anything about this, so we rebuilt it:

Feature selection by choosing the category, type and feature, with this is solved what we did with utilities / feature manager.

Also the bottom button allows selection of feature based on an object that already has and the other the allocation of the active feature to one or more elements.

Then on the side tab other tools were placed to see the feature information and remove it, which is the one’s we knew as atach and detach.

Issue resolved, except for the change of priority (never used), the 5 commands to manage features were resolved. 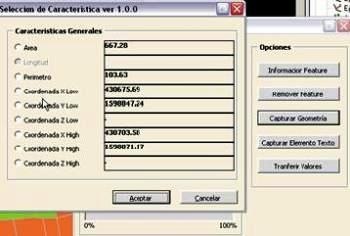 Always in the right pane, it was placed a button to capture the geometry information, selecting the object rises a panel that lets you choose what you want to update: area, perimeter, length or range of coordinates. This was done in Geographics with database / coordinates area-perimeter-update

And then it was made a last button for data transfer between an object and another; this is asked for if data are replaced.

In visualization, or what Geographics called display manager, it was developed within the same application a functionality to do this, almost as being done by geographics. Here you can see the video. 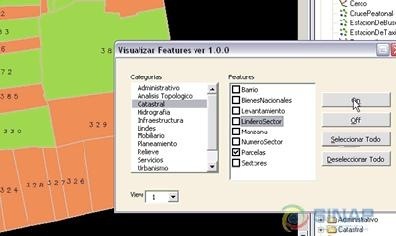 If you notice, it is the list of categories, with its attributes and buttons to turn off, turn on, select or deselect everything. It also has an additional option to choose the view.

To my knowledge, this was one of the first implementation steps made on xfm, in 2005, less than a year after Bentley presented this on the 2004 conferencing in Orlando. Right now that Bentley is making the promotion of its new tool trying users to stop using Geographics.

Concluding now? While Bentley Map allows developing on .net and makes almost any customization, is not appropriate what Bentley makes when forgetting what their users are accustomed to do. In our case, we had egeomated developers at this level, but it is not that “out of box” software should promote if it want to be used by the crowd.